Video Game / Story of the Blanks

It is recommended that you play the game before reading this page. All spoilers will be unmarked. 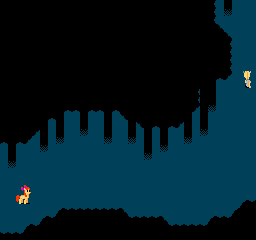 A mysterious pony draws you deep into the Everfree Forest. Seems legit.
Advertisement:

Friendship is 8-bit: Story of the Blanks is a My Little Pony: Friendship Is Magic fan-made game made by Donitz in the style of traditional 8-bit games.

It follows Apple Bloom as she wanders away from Twilight Sparkle in the Everfree Forest and happens upon a village (called Sunny Town) full of ponies preparing for a party. She's invited to come in and enjoy herself, and aside from the fact that none of them have Cutie Marks or even know what Cutie Marks are, everything seems wonderful and straightforward...

...until she discovers what lies within the fireplace, and learns of their terrible secret.

The game isn't very long (if you don't die, you could finish in ten minutes), but still a great play, and even won Equestria-Gaming's "Creepy Game" contest. Play it for free here

Not to be confused with The Blank, and no such Blanks appear in the game.

was in the works, but it's since been cancelled

Story of the Blanks contains examples of the following tropes: