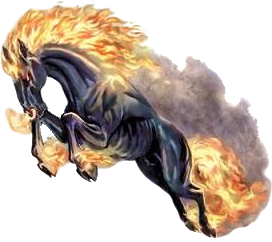 Want to emphasize how badass a hero or villain is? Simple: add a truly horrific horse!

Standard accessories include menacing wings, red eyes, horns, fangs, and split hooves like a goat (alternately, claws). Horses that are nothing but skeletons are also popular choices for The Undead to ride, and you can increase the glam with a fiery aura or hooves that leave burning prints behind. Usually either truly untamable or ridden by villainous characters, but sometimes The Hero can subvert expectations and take one for their mount.

As horses these days are kept mostly for recreation and sport, and are often seen as oversized pets for little girls, it can seem odd to think of them as dangerous. But make no mistake, a horse can weigh half a ton or more, and an angry or panicked animal can easily kill a man. In the medieval period, horses were bred and trained as Beasts Of Battle who could rear or kick on cue — and a horse capable of carrying a medieval knight in full armor was very large and strong indeed. They were the Sherman tanks of their day, and it's not a surprise that horses in the cultural imagination of the time were elevated from military equipment into legendary monsters.

by Henry Fuseli, which in turn was based on the "Mare,"

Often goes hand in hand with Horsemen of the Apocalypse, as well as The Wild Hunt.

A Sub-Trope of Cool Horse. A Sister Trope to Hellhound. Compare Moody Mount (where a horse is difficult to ride and tame for mundane reasons), Horsing Around (where the horses are simply rude or cunning), and Diligent Draft Animal (where the horses are used for moving loads). For similar connotations on antagonistic farm animals, see also Brutish Bulls, Gruesome Goat and Cocky Rooster.

Contrast the Unicorn, which is a holy animal (though not always nice), White Stallion (the usual mount of a hero), and Herbivores Are Friendly. No relation at all to Hellish Copter, nor to Undead Horse Trope.