Literature / The Moon of Gomrath 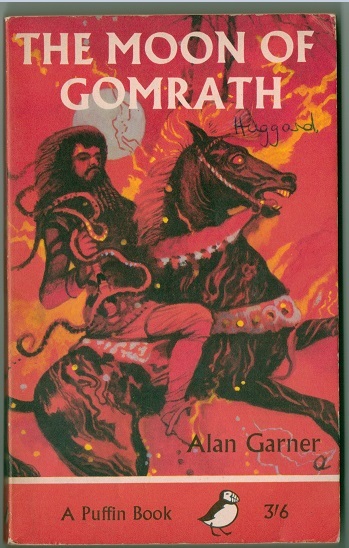 Published in 1963, this was the sequel to The Weirdstone of Brisingamen by Alan Garner and directly continues the story.

The children Colin and Susan, after their involvement with the world of myth and magic, are several months on from the events of Brisingamen and are troubled and a little bit angry that the magical world they saw so briefly has turned its back on them, as if they are no longer needed now they have played their part and surrendered the weirdstone to its rightful owner.

To ease the surrender of the Weirdstone in The Weirdstone of Brisingamen, Susan was given a magical bracelet by Angharad Goldenhand. Her assumption of this bracelet has launched Susan unwittingly on a destiny connected with the cycles of the moon, and hence the older wilder powers of the world (perceived in a rather chauvanistic way as being unbiddable and female). The Moon of Gomrath begins when the elves (lios-alfar) borrow the bracelet, with her consent, to see if its power can be directed by them to battle an unknown evil power in their own lands in Sinadon. However while unprotected by the bracelet, Susan is possessed by the Brollachan, an ancient evil released after an old pit is broken open during building work. The wizard Cadellin, guardian of the sleeping knights in The Weirdstone of Brisingamen, cannot restore Susan after the Brollachan has been driven out of her body; instead perceiving that her spirit has been driven to voyage in other spiritual dimensions analagous to Heaven and Hell, unreachable with ordinary means. It is Colin's true-hearted heroic love and need for his sister which provides the answer; as he tooresponds to the older powers of the world. He therefore comes to seek the Mothan, a mythical plant which grows on the Old Straight Track, by moonlight. This is a motif inspired by the book of the same name, which is part of the Old Magic, in contrast to Cadellin's High Magic. Susan is dramatically restored to her own body.

However, her exposure to other levels of existence has sensitised her to the powers with which she and her brother have been coming to associate and the story takes a new dramatic turn. On walking home across the Edge on dusk, they are inspired to build a fire to keep warm, Susan almost manically so. This fire includes rowan and pine which unintendedly act as a wendfire, which on this night of the year has the power to call ancient spirits from their mounds. Colin and Susan release the Wild Hunt, which return several times during the course of the novel.

While they are trying to undo what they have done, the Morrigan, acting through an evil Dwarf working for the Dark Side, captures Colin and imprisons him in Errwood Hall, a ruin in this plane of existance which her magic restores into its full glory. However, when not bathed in moonlight, the interior of the Hall exists only in a lightless magic realm. This sets up the denouement, a pitched battle between the forces of the Morrigan (goblin-like bodachs and wildcat palugs) and Susan's allies (the lios-alfar, the dwarf Uthecar, and man Albanac), both willing and unwilling. Although Colin is rescued, Albanac is killed. When the elves withdraw their support as a lost cause, the Morrigan finally releases the Brollachan, focusing it on Susan to destroy her growing potential as a force for good. Colin blows a horn, his gift from Angharad Goldenhand, which saves the day and the Old Magic is set free forever. susan glimpses the Daughters of the Moon riding into the stars with the soul of Albanac and yearns to ride with them, but is pulled back into the human world (for now) by the intervention of Angharad, who promises her that one day the time will come when she may ride with the sisters.

Light wendfire on the mound on the Moon of Gomrath, and these tropes may be freed to walk the Earth: