Eyes Do Not Belong There 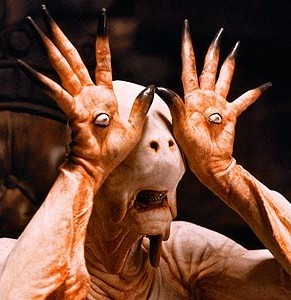 Making A Date with Rosie Palms horribly unpleasant since 2006.
"I know a girl who's got eyes on her feet
So when she starts dreaming she roams
And she'll know where she's going"
— The Cat Empire, "So Long"
Advertisement:

Eyes in places where they just don't belong are a good way to creep people out. The palms of your hands are a particularly frequent place to put them, but they can be anywhere on the body.

Wizeman's eyes are located on all six of his palms.

Alternative Title(s): Eyes Should Not Be There

Wizeman's eyes are located on all six of his palms.