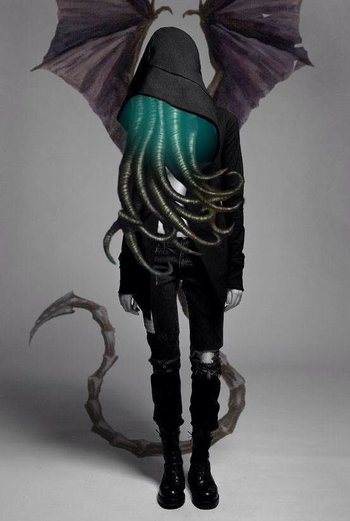 "I think they’re cute."
Taylor's response when questioned about the eyeballs on her tentacles
Advertisement:

Starry Eyes is a Worm fanfic by Helnae about how cutting off your face is the best way to make friends. Essentially, it's an Altpower!Taylor story where Taylor's power makes her a skin-covered portal to a mysterious realm inhabited by many beings straight out of H. P. Lovecraft (most notably a shoggoth and a nightgaunt). Taylor can control limbs that they poke out through holes in their skin, so if she cuts bits of it off she can fly like her new friend Melody and use her friend Aria's shapeshifting Combat Tentacles.

As another side effect of her power, Taylor has no idea how freaky she looks when doing this.