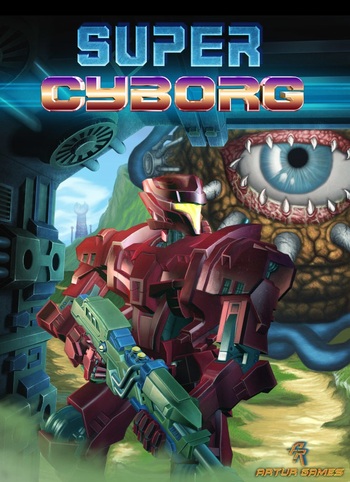 The Imeotra beast can see you.
Advertisement:

Super Cyborg is a retraux-style action game released for the Nintendo Switch and PlayStation 4, but inspired by old-school arcade games popular way back in the late 90s.

Taking a page from the classic Run-and-Gun action game, Contra, once again earth is a hellhole taken over by an alien life-form.

An outbreak have occurred in a bio-lab in a top-secret government facility, when experimentation on an alien life-form called the "Xirxul" leads to it escaping confinement and infecting everything in its path. Soon enough, the outbreak had spread beyond control, leading to a massive infestation of assorted hostile alien life. Like Contra before it, you are an elite Super Soldier (this time also a cyborg, just because) and you're sent to contain the alien outbreak across seven levels infested with monstrous enemies.

Compare Iron Meat, another retraux game based on Contra.