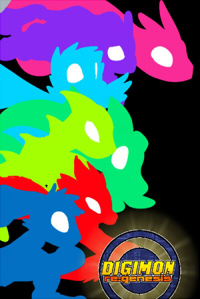 This sounds like the premise for a bad Saturday morning cartoon.

(Digimon re:GEN for short; simply Digimon Regenesis for those for whom the silly formatting is too much) is a Digimon fanfiction (go figure), focusing on (yet another) new interpretation and history of the Digital World, and a whole new set of kids and original digimon. ... Still here? Okay. The setup runs as such:

A mysterious, otherworldly entity with the powers of a god, Era, has been assailing the Digital World for the past hundred Digital years. Having appeared with no warning, he slowly overtook more than three quarters of the digital world under his control, turning Digimon against their brethren and corrupting huge portions of the world.

Ten years have passed in the real world since Era's sudden appearance in the Digital World. Reaching their last-ditch lines of defense, the five sovereigns of the Digital World have called upon the power of Yggdrasil, the core of the Digital World, to summon a handful children from the real world to help fight.These kids are suddenly plucked out of his or her daily life and whisked away to the Digital World. There, they're partnered with a Digimon, and each is granted a mysterious talisman that uses the power of their virtues to help them help their digimon fight. They quickly ally themselves with their digimon partners, and the digimons' mentor, the mysterious (and often questionably sane) Deekamon.

The problem, coming into the story, is this: there are supposed to be seven of them, but there are only six present. The seventh child, summoned separately from the rest, and his partner, looking for him, have gone missing— but the group needs to function as a whole to stand a chance. Forced to set out on a mission to find their last teammates (and after that, Era), the story changes from a simple find-and-rescue mission to something much more world-shaking than they thought...

As may be evident by the summary, Digimon re:GENESIS very much attempts to evoke an original flavor feel, despite the all-new cast. It follows the basic structure of Adventure: a number of children find themselves teleported to the Digital World in order to protect it from a mysterious menace using the powers of their personalities' greatest strengths. Callbacks and subtle references to canon series abound. Though it starts a bit slow and predictable, it gathers steam to stand on its own two feet and do its own thing as time goes on.

, or a deviantArt group

meant to house all the story and art.