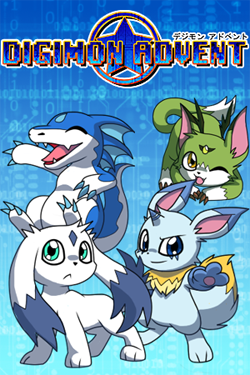 Cute digimon characters. Surely nothing bad could happen to them, right?
"Without a doubt, you and your friends bare a huge weight to carry, for the sake of the city... perhaps, even the world."
Advertisement:

Set in the year 3000, the Earth has vastly changed from how we know it.A disaster in 2012 left everything in near-ruins, and now, even one thousand years on, humanity is still struggling to find it's feet. As if this wasn't bad enough, the presense of strange creatures threatens the inhabitants of Neo Tokyo, a city that seems to be the epicenter of the attacks.

Enter Amy, a student from England studying abroad (with more reasons to her visit beyond her studies), and Joey, a young man searching for his missing grandfather whilst working under the mysterious corporation 'Arch Angel', whom seem to be distributing Digimon out to the general public as 'digital assistants'.

Both of them become entangled in the personal quest of Barghestmon, whom becomes their mentor, and that of the conflict between the enigmatic Arch Angel and a group of rebellious teenagers known as The Resistance.

As if that isn't enough to contend with, a deadly virus is infecting and corrupting the Digital World at an alarming rate, causing many of the inhabitants to turn to drastic measures.

with help from series co-creator DS

, and the contributions of various FDD community members, the story is on-going and promises to be HUGE.(The author would like to take this moment to personally apologize for the gap between updates in advance.)

It's also balancing a sizeable and colourful cast on top of a plotline that is better than it sounds.

, with a deviantart gallery found here

Tropes found in this fanfiction include: