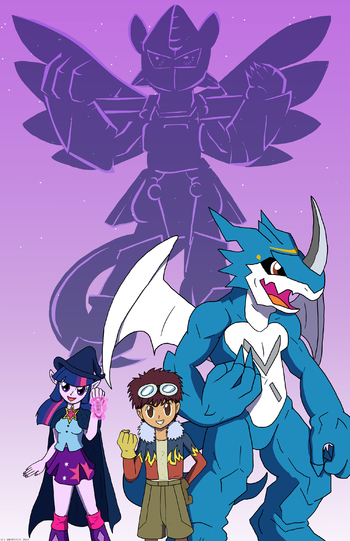 is a My Little Pony: Friendship Is Magic/Digimon Adventure 02 crossover written by Zennistrad

In the aftermath of her ascension to alicorn Princess, Twilight Sparkle has begun work on ENEIGHAC, Equestria's first-ever computer. Upon showing it to her friends, an unexpected malfunction causes Fluttershy to witness the Digital World, a simulated world created by ENEIGHAC. Having been treated more of a doormat than usual lately, the pegasus embraces the idea of a simulated world where she can vent her anger on the creatures of the Digital World and later while Twilight is on a picnic with the rest of their friends, sneaks into the lab and enters the Digital World...

It isn't long afterwards that the Digi-Destined become aware of a new threat to both worlds: a Digimon calling itself Vespimon, who seeks to finish what Ken started as the Digimon Emperor...