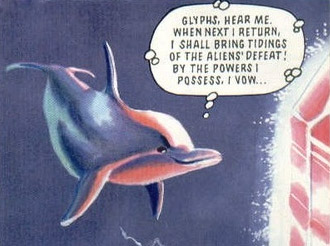 "Wait, they're on land? Crap."
Advertisement:

In fiction, dolphins will be portrayed primarily as heroic and helpful creatures. They're a marketable species of hero, partly because they're cute and partly because of real-life stories of dolphins saving human lives, either by guiding them to shore, fending off sharks or helping them to remain afloat until help arrives.