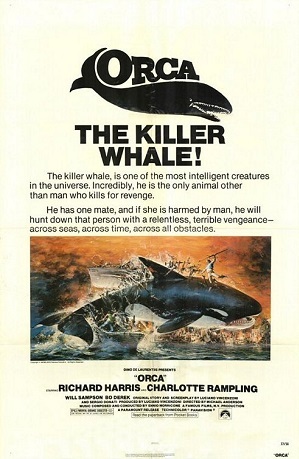 "Find a fish tougher and more terrible than the great white."
— Dino de Laurentiis to the producer Luciano Vincenzoni, after seeing Jaws
Advertisement:

Orca: The Killer Whale is a 1977 horror film starring Richard Harris, Charlotte Rampling, Bo Derek, Keenan Wynn, and Robert Carradine, produced by Dino De Laurentiis and released by Paramount during the "When Animals Attack" phase set in motion by the success of Jaws two years earlier.

A hunter squares off against a killer whale seeking vengeance for the death of its mate.

For tropes on its Novelization, see Orca: The Killer Whale.