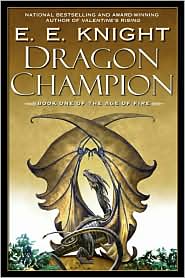 Age of Fire is a fantasy series by E. E. Knight that follows the lives of three dragon siblings. The three dragons separate shortly after their parents and fourth sibling are killed by dwarves. The first book follows Auron as he travels the world having adventures, making friends, and learning about dragons and why they are disappearing from the world. The second book follows Wistala, the only surviving female of the clutch, who is determined to avenge her parents' and sister's murder. The Copper is the main character of the third book who, after betraying his family, is betrayed in turn by the dwarves. He finds his way eventually to an underground society of dragons. The fourth, fifth, and sixth books rotate through the three siblings' perspectives after they reunite, and deal with the characters working to determine the role dragons will play in the world.