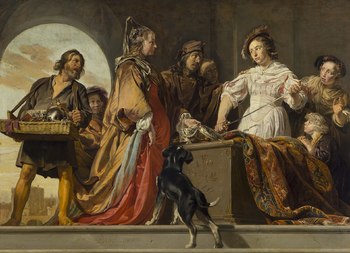 The Achilleid is an incomplete Roman epic written by Statius late in the first century. The two chapters that were completed depict Achilles being hidden away by his mother Thetis on the island of Skyros before being discovered by Ulysses and convinced to fight in the Trojan War.

Despite being short, incomplete, and rarely remembered, the Achilleid has had a profound effect on later depictions of Achilles and Greek heroes in general. Statius appears to be the inventor of Achilles' famous invulnerability, the role of the River Styx in Achilles' Origin Story, and the idea that his heel was, well, an Achilles' Heel in the forms that we understand them today. Like most of Statius' works, it was incredibly popular in the Medieval Europe and scholars of the time considered him an equal of Virgil and Ovid. Its influence is particularly pronounced on later examples of epic poetry like The Divine Comedy and The Faerie Queene.

The Achilleid provides examples of: