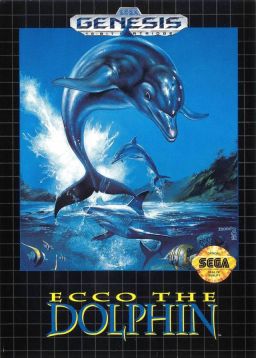 A Sega series about a New Age time-travelling bottlenose dolphin who fights space aliens. His friends include a pteranodon, a telepathic strand of DNA, and flying dolphins from 10,000,000 years in the future. The games were developed by the Hungarian studio Novotrade International, later known as Appaloosa Interactive.

The games are notoriously difficult to survive and beat. Players must solve puzzles while keeping an eye on enemies and the ever-present Oxygen Meter. The storylines tend toward the surreal, since it's from the viewpoint of a dolphin with minimalist dialogue, and the atmospheric soundtrack generates a lingering sense of eeriness. Perhaps the only game which came close to matching Ecco's mood at the time was Myst, which has a similar cult following.

Ecco originated on the Sega Genesis/Mega Drive, and the first game is the one general audiences are familiar with: Ecco's pod were snatched from the seas by a mysterious storm, so he set out to find them. He went to see a blue whale for advice. The whale didn't know much, but it sent Ecco to talk to the Asterite, the oldest being in the seas, which has the appearance of globes arranged on a double-helix. The Asterite recognised Ecco and said it could help him, except it was missing a globe and thus not at full power. The solution was simple: travel to Atlantis and use the Time Machine stashed there to go back in time 55 million years to retrieve the wayward sphere. In Atlantis, Ecco also discovers that the source of the "storm" was a species of hive-minded aliens who had lost the ability to grow their own food and was thus harvesting from Earth's seas every 500 years. In the end, Ecco saved his pod and set back the Vortex invasion. Got all that?

In Ecco: The Tides of Time, Ecco found out from his descendant, Trellia, that the Vortex Queen had survived their last encounter and killed the Asterite. Ecco's earlier time-travelling had also split the timestream in two: one where Trellia and her fellows created a paradise for themselves, and one where the Vortex razed the sea and sky, killing the Earth. Ecco sought to save the Asterite and keep history on its proper path. It ended with Ecco mysteriously vanishing into the "Tides of Time".

That was the end of Ecco, save for an Edutainment Game called Ecco Jr. Ecco also made some promotional appearances in the UK's Sonic the Comic.

Years later, a fourth game was released for the Sega Dreamcast in the form of Defender of the Future, which moved the series into three dimensions. The story, written by David Brin (and narrated by Tom Baker of all people), cut out most of the dreamlike elements and kept the basic framework: a dolphin named Ecco, aliens (now colloquially known as "the Foe"), and time travel. It also introduced human society, whereas the original games relegated humans to backgrounds in Atlantis and the odd sunken ship. In Defender, the Foe sought to steal dolphinkind's "most noble traits": Intelligence, Ambition, Compassion, Wisdom, and Humility. It was of course Ecco's job to get those traits back over the course of three alternate futures: Man's Nightmare (no humans on account of them going extinct in a war against the Foe), Dolphins' Nightmare (dolphins resorting to warfare to drive humans from the seas), and Domain of the Enemy (the Foe have completely taken over). A tentpole franchise was never in the cards, but at least it upheld the graphical and musical splendor expected from the IP.

All in all, Ecco is a very bizarre, haunting, frustrating, and strangely-compelling series. The fanbase is small, but devoted, and there is at least one fansite for it on the Web

. Don't expect to see any more of Ecco from the Genesis or Defender continuity, unless as an April Fool's Day prank.

At present, the first three games (Ecco, Ecco 2, and Ecco Jr.) are available on various official emulators, such as PlayStation Network, Steam, and the Wii Virtual Console before its closure. Defender was ported to the PlayStation 2 but has not seen a re-release since then.

The creator of Ecco tried to crowdfund a Spiritual Successor, The Big Blue, but it was plagued by bad marketing and only marginally successful. In 2016, a beta version of Defender's lost sequel was unearthed and publicly released on the Internet.

Alternative Title(s): Ecco The Dolphin Defender Of The Future