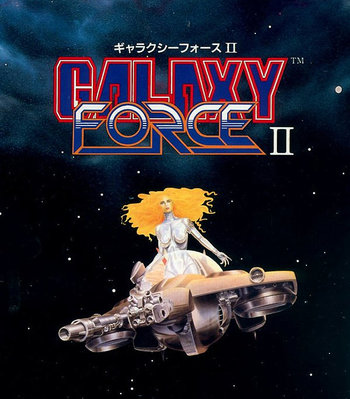 Galaxy Force is arcade rail shooting game by Sega, released in 1988. It's a space flight simulation game that relies on sprite-scaling, like Space Harrier or After Burner. The main selling point of Galaxy Force was its visual - flying through the diverse enviroments and fighting the giant enemies that only consist of a series of layered sprites without using a single polygon was exceptionally impressive for its time, not to mention the fancy sit-down cabinets

The game was quite successful at debut in arcades, but its popularity didn't last long; the main reason for this was that it never received a proper port on any home gaming systems. Sega Y Board, which Galaxy Force was built on, was simply way too powerful for the contemporary systems to even remotely replicate it. Japan-exclusive FM Towns version suffered from several cut-downs and sprite flickerings, and the other conversions for Sega consoles (Sega Master System, Sega Genesis) and western computers (Amiga, Atari ST, Commodore 64, Amstrad CPC, ZX Spectrum) ranged from serviceable to downright awful. Fortunately, a faithful 1:1 conversion was eventually created and brought over to modern platforms by M2.