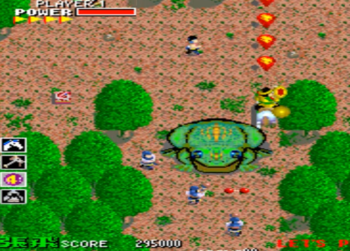 Remember that time in Chinese history with the giant frog infestation?
Advertisement:

Garyo Retsuden is a 1987 arcade action game loosely based on Romance of the Three Kingdoms. Loosely.Very loosely.

Taking place in an alternate version of Three-Kingdoms era China where giant monsters and evil wizards exist, the three sworn brothers, Liu Bei, Guan Yu and Zhang Fei, have somehow gained the powers to expel energy blasts and fireballs from their hands.

When the three brothers' sworn enemy, Lu Bu, abducted the princess, it's up to the trio to embark on a rescue mission as they take on enemy forces. Whose ranks includes giant slugs, frogs, bats, two-headed tigers and the players are left scratching their heads when pondering the question, "Which chapter in Three Kingdoms did all these insanity originate from?"

Gameplay-wise, Garyo Retsuden is more or less another Ikari Warriors clone, save for the setting. And that the main characters have superpowers.