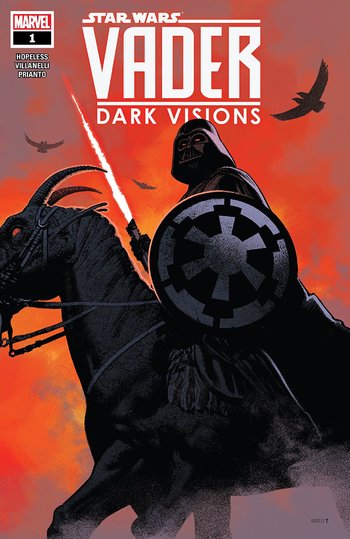 Darth Vader is the Empire's most powerful warrior, mercilessly enforcing peace and order throughout the galaxy. Killer, monster, savior- what is the true legacy that the Dark Lord has left behind for those unfortunate enough to cross his deadly and destructive path?
Advertisement:

A five-issue miniseries set in the Star Wars universe released in 2019, written by Dennis Hopeless.

The series focuses on Darth Vader through the eyes of different minor characters. Issue #1 is from the point of view of a young boy whose people Vader inadvertently saves from a dangerous monster. Issue #2 centers on Commander Tylux, a Star Destroyer commander desperate not to disappoint Vader. Issue #3 is about an Imperial nurse who develops an obsessive crush on Vader. Issue #4 focuses on a hotshot X-Wing pilot who comes face-to-face with the Sith Lord in space combat. Issue #5 concludes the series with a bartender who gets chased carrying stolen Imperial data into a jungle with poisonous hallucinogenic thorns.