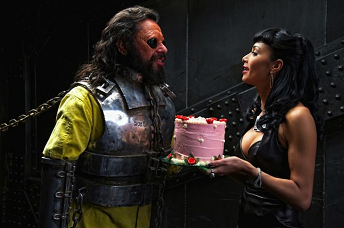 Hurray! The heroes have captured the murderer and locked him away, and the day is saved.

So why is he getting all this fan mail?

The Monster Fangirl (and this is almost Always Female, though the genders may be flipped) might have the belief that Love Redeems, or she's In Love with Your Carnage (in the worst case), or believes that he's really innocent. If she's aware of his evil nature, it's essentially a form of All Girls Want Bad Boys turned Up to Eleven.

Their fate is usually to be casually discarded to wind up another victim or to go to jail for the crimes they commit to aid the Monster, often screaming declarations of love all the way. As a villain is not always redeemed, the woman's deluded attraction to the dangerous psychopath may also be a romantic manifestation of Too Dumb to Live.

Depressingly, this occurs even in Real Life. In medicine, this is sometimes called hybristophilia,

a paraphilia in which one is sexually aroused by the fact that somebody has committed a heinous crime.

Compare Draco in Leather Pants, and to a lesser extent, Rooting for the Empire for when the fandom does it. See also Psycho Supporter, Nightmare Fetishist, and Horrible Judge of Character. For a fangirl of a literal monster in a relationship with one, see Interspecies Romance, Beast and Beauty, or You Sexy Beast.