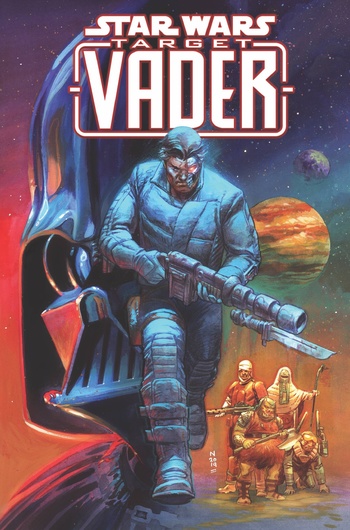 Darth Vader is the most dangerous being in the galaxy.
With the entire military might of the Empire at his disposal and the
dark side of the Force at his command, no foe can hope to challenge him and win.

But someone has a score to settle with the Dark Lord.

The hunt is on.
Advertisement:

Emboldened by recent victories against the previously thought invincible Empire, the fledgling Rebellion have set their sights on a bigger prize: the Imperial High Command. To expedite such a bold venture, the Rebels turn to one of their few allies in the criminal underworld, the Hidden Hand, who put out a contract on Darth Vader himself. A Ragtag Bunch of Misfits is assembled to go after Vader, led by Captain Beilert Valance, who has his own beef with the Empire. Meanwhile, Vader receives new orders from Emperor Palpatine: Find the leaders of the Hidden Hand and shut them down... permanently. A game of cat and mouse ensues.