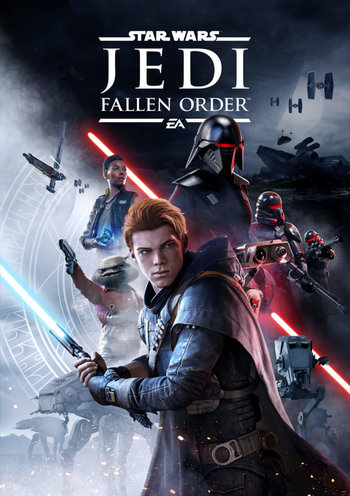 Trust only in the Force.
"You know, I've been alone for... a while now. Without any... purpose. Just hiding. It's no way to live. Not for a Jedi. Or a droid. Maybe Cere was right... Maybe we're done hiding."
— Cal Kestis
Advertisement:

Star Wars Jedi: Fallen Order is an Action-Adventure Metroidvania Souls-like RPG game set in the Star Wars universe, developed by Respawn Entertainment (Titanfall, Apex Legends) and published by Electronic Arts for the Playstation 4, Xbox One and PC. It was released on November 15, 2019. Updated versions for the PlayStation 5 and Xbox Series X|S released on June 11, 2021, and are available as free upgrades to owners of the last-gen versions.

Taking place five years after the end of the Clone Wars and the rise of the Galactic Empire, the game follows Cal Kestis, a maintenance worker who dismantles derelict Republic ships and equipment as a part of post-war clean-up. Little does anyone know, Cal is a former Jedi Padawan who survived Order 66 and went into hiding. When an industrial accident causes him to reveal his Force-sensitivity, the Jedi-hunting Imperial Inquisition is alerted to his survival and he is forced on the run. With the Empire at the height of its power, Cal must learn to survive and hide in a galaxy where he may well be the last of the Jedi, and perhaps begin to rebuild the fallen Order.

Gameplay revolves around a mixture of classic Metroidvania-style exploration and lightsaber combat in a Soulslike style, with Cal and diminutive droid sidekick BD-1 exploring a handful of interconnected areas on several different planets in the Star Wars galaxy. Areas are vast and full of secrets and upgrades, opening up further as both Cal and BD-1 unlock more abilities to further traverse the galaxy. Combat focuses on commital attacks, quick dodges, and blocking and parrying.

A prequel comic series, Dark Temple, focuses on the backstory of Cal's mentor, Cere Junda, when she was a Jedi Padawan. A sequel, Jedi: Survivor, was announced in January of 2022 and officially revealed on May 27th, 2022, with a release slated for the following year and targeting only PC and the ninth generation consoles.