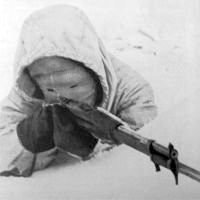 Some take this more literally than others.
"(1) Emotional balance. The sniper must be able to calmly and deliberately kill targets that may not pose an immediate threat to him. It is much easier to kill in self-defense or in the defense of others than it is to kill without apparent provocation. The sniper must not be susceptible to emotions such as anxiety or remorse. Candidates whose motivation toward sniper training rests mainly in the desire for prestige may not be capable of the cold rationality that the sniper's job requires."
— U.S Army Field Manual 23-10: Sniper Training
Advertisement:

If you find The Stoic deployed by the military in the field and killing your dudes while remaining undetected, he or she may be this: the cold, silent, camouflaged hunter with a scope, a rifle, a very good eye and near-zero emotions, who can shoot you in the face from a mile away and not lose a wink of sleep over it.

A trope commonly applied to a lot of snipers, mostly the loners, what with loners being eerie. Prevalent due to the allure and popularity of the idea of a lone, stealthy, emotionless, and mysterious "lone wolf" prowling invisible in the nights of the jungle, in search of prey. May also overlap with a Hunter of Monsters. While overlaps with Psycho for Hire and Sociopathic Soldier are possible, they are very rare due to the stereotype that sociopaths are less on the emotionless and more on the totally bonkers side.

See also Weapon of Choice. Archer Archetype is the mood simile in medieval and fantasy settings, and may or may not overlap with Master Archer. Likely to find work as a Professional Killer. A common subversion is the Friendly Sniper, who is not only much more personable but also usually saner (and is more likely to be depicted as a good guy). To tell them apart, check out if the character is portrayed as evil or eerie/sinister — or at least it is shown that those aspects of the job have an adverse and/or dehumanizing impact on their psyche.