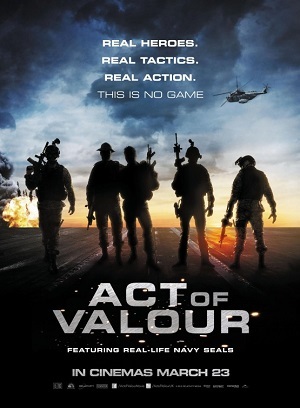 "The only easy day was yesterday."
—Tagline & SEAL motto
Advertisement:

Act of Valor is a 2012 war film, revolving around a US Navy SEAL platoon from SEAL Team 7 on a mission to rescue a kidnapped CIA officer and stop terrorists planning an attack against America.

for Special Warfare Combatant-craft Crewmen; as work progressed the Powers That Be realised that they had enough material for a feature-length movie and began pushing in that direction, a Top Gun equivalent for SEALs.

A trailer can be viewed here