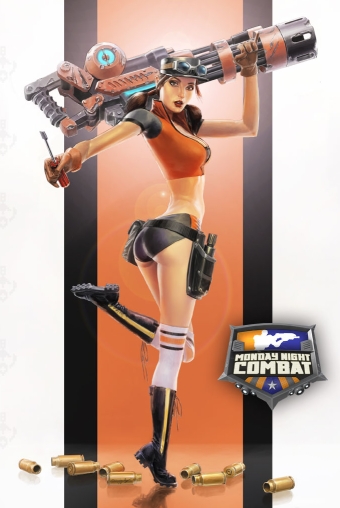 The Pit Girl, finishing up a day's work before she goes to her night job at the local Hooters.
"Welcome to Monday Night Combat. For those of you about to die for our entertainment, we salute you."
—Mickey Cantor
Advertisement:

Monday Night Combat, developed by Kirkland, WA based Uber Entertainment is a Third-Person Hero Shooter released on Xbox LIVE Arcade during the second annual "Summer of Arcade;" it was later released on PC via Steam. Taking place 20 Minutes into the Future MNC revolves around a futuristic Blood Sport of Clones versus Bots with the same popularity, syndication, marketing potential and overblown spectacle of the NFL.

MNC's gameplay itself is a sort of blend of Team Fortress 2's class-based system, traditional Tower Defense games and DOTA's "hero versus hordes of enemies to destroy an objective" gameplay. The six classes (The Assault, The Support, The Gunner, The Assassin, The Tank and The Sniper) all have their own distinct play-style with unique abilities and equipment with each one filling a particular role during a match. Really, there just aren't any other games like it.

The first wave of DLC was released on December 1st, 2010

, adding a new map for Crossfire, a new map for Blitz, a new mode for Blitz, more private match options, more protags, more intros and loading screens, the option to reset your level to get a new icon, and churros. Unfortunately, the developers dropped support for the game, and later shut the game down permanently in response to Europe's new data privacy laws making the game too expensive to be compliant.

A PC version was released on January 24th, 2011, and wouldn't you know it? There were tie-in aesthetic items

for both MNC and Team Fortress 2!

All matches in MNC revolve around one thing: the Moneyball, a large, shielded metal orb that the players have to protect from damage at all costs. In its normal form the Moneyball is impervious to all damage, but Bots have the ability to take out its shield and make it vulnerable by exploding on it(or just shoot it in the case of Jackbots). In order to protect it the players have to fend off the enemy by defending their base with a variety of turrets (built from turret "nubs" around the base) and other traps and obstacles. If a team fails to protect their Moneyball it will explode into a shower of coins, signaling their defeat and the end of the match.

The two basic gametypes are:

A sequel, called "Super Monday Night Combat", was released April 18th, 2012. It featured new classes, added new ones at semi-regular intervals, and had more of a focus on the strategy and leveling of Dota than MNC. It was free-to-play, with optional things such as cosmetics that you could pay for. Super MNC had an extended beta period, at first as a closed alpha available to MNC's top players, eventually becoming an Invitational (Read: Closed-beta). To coincide with the intergration of Steam Trading new Team Fortress 2 items were released and were tied to achievements rather than pre-order.

There was also a "Training Camp", a playground in which new players could mess around, get a feel for Pros, and hit various buttons on the map to be given information on specific mechanics of the game and what role they play (In regards to Super Crossfire).

Super Monday Night Combat received its last update on March 15, 2013. Like Monday Night Combat, it was shut down in May 2018 due to the development costs of becoming compliant with Europe's new privacy laws far outweighing the money that the game was bringing in.