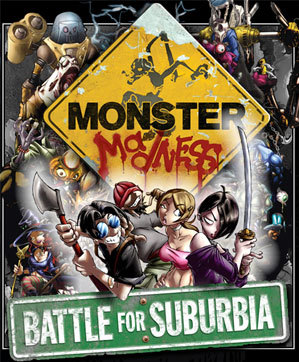 Monster Madness is a top-down survival twin-stick shooter affectionately parodying B-Movies, notably monster movies. It's very reminiscent of Zombies Ate My Neighbors. Artificial Studios and Immersion Games were the original developers while Immersion and Psyonix Studios handled the port, and SouthPeak Interactive was Publisher for both iterations. The Xbox 360 and PC versions have the subtitle Battle for Suburbia, while the Polished Ports on the PlayStation 3 and Android have Grave Danger.

Has nothing to do with James Rolfe's Monster Madness.