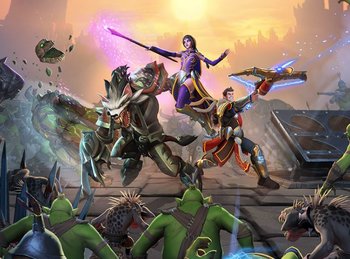 The Order's back, baby!
Advertisement:

Developed by Robot Entertainment, Orcs Must Die! Unchained is a sequel to Orcs Must Die! and Orcs Must Die! 2. While OMD is a single-player Always Over the Shoulder Tower Defense Action Game and OMD2 is more of the same with addition of Co-Op Multiplayer, OMDU took the series into a Competitive Multiplayer direction, although feedback from the fans drew the developers to shift back to the classic co-op Tower Defense gameplay that made the previous games so popular.

The story, such as it is, is set some years after the events of Orcs Must Die 2. The Order has been rebuilt by Maximillian the War Mage and Gabriella the Sorceress, but they face a new threat: the vast mobs of orcs that they slaughtered before have returned, now formed into a strong, organized army known as the Unchained. Both sides have rallied armies and heroes to battle one another for control of the rifts that connect the various worlds together.

Borrowing heavily from the Multiplayer Online Battle Arena tradition, the game presents a variety of heroes with their own unique abilities, enabling teams to be formed from a wide array of character types and playstyles. In addition, a wide range of trap types, as well as NPC Guardians, equippable gear, and traits are available. The core gameplay, however, is still the traditional minion-slaughtering, trap-laying Tower Defense, but much more complex and in-depth compared to its predecessors.

The game also featured a "Siege" gameplay mode, in which players competed in the traditional MOBA style of competitive multiplayer, with their own customized loadouts of traps, minions, and guardians. However, while this mode did feature a small but hardcore player base, it was largely unpopular, and Robot Entertainment chose to eliminate it and rebalance the gameplay around cooperative player-versus-enemy survival, eventually replacing it with a "Sabotage" mode where two teams try to defend their maps while also spending money to send obstacles at their opponents.

After a long open beta period, the game was released as free to play on April 20th, 2017. After a lengthy period of poor performance, the game was eventually shut down on April 8, 2019.