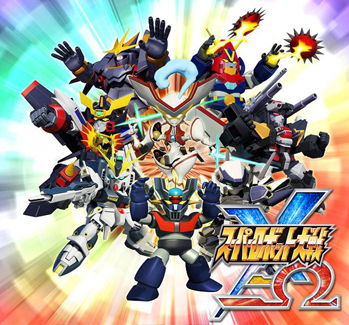 Released in 2015, Super Robot Wars X-Ω was a smartphone mobile game for the Android and iOS platforms in the Super Robot Wars franchise, developed by SEGA, that mixed Tower Defense with Real-Time Strategy elements, similar to Chain Chronicle. Unlike the traditional Turn-Based Strategy installments, X-Ω relied on a gacha nature of play, thus allowing its roster to reach into the hundreds of individual series listed, even reaching different genres other than Humongous Mecha from different media. This marks X-Ω at being the most crowded title in Super Robot Wars history (With a whopping total of 192 series being featured!), alongside having the largest number of new debuts (88!).

Ironically, the X-Ω approach of using series beyond simply Mecha would affect future titles, such as Super Robot Wars V, Super Robot Wars X, Super Robot Wars T and Super Robot Wars DD, where the requirements of which series can be included are significantly lowered, with loads of Unexpected Characters popping up. From Super Sentai to Mega Man and even Godzilla, the King of the Monsters himself making an appearance.

The game ended service on March 30, 2021. This was accompanied by the announcement of an offline version that will let players download and view some of their data from the main game prior to its closure.

Series included in X-Omega are (debuting series are rendered in bold):