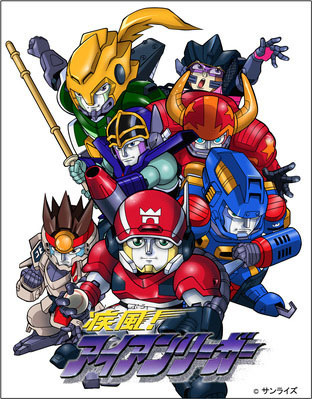 Whirlwind! Iron Leaguer is a 1993 shonen sport anime series created by Sunrise. Not really that well known in the west. The anime combines mecha genre and sports together initially in the form of a good guys vs cheaters type of story. The series debuted in Super Robot Wars Neo for Wii.

In the future, mankind has developed a multi-sport tournament known as Iron League, using artificially intelligent robots as the players instead of humans. The competition is very popular. However, its main support comes from the Dark Organization, a group that produces cheating Iron Leaguers that use dirty and violent tactics in games as a sure ticket for fame and popularity. While the sports community has been turned into a dangerous and (figuratively) bloody contest, Silver Castle, the team with the lowest winning ratio, tries to preserve true sportsmanship by playing sports by their original rules without any cheating or violence. The team's fate as well as the fate of the Iron League itself is changed when two Iron Leaguers - Mach Windy, Dark Prince FC's former ace striker and Magnum Ace, a mysterious but skillful baseball-playing Leaguer - join Silver Castle, and gradually lead the team back to its forgotten glory. It's not all fun and games, however; as the story goes on, it is revealed that the Iron League is actually a front for something far more sinister...

The series later got a five-episode OVA, Under the Flag of Silver Light, which is a direct sequel to the TV series. Silver Castle, after being bought by the Universal Corporation becomes the team that employs Blood Sport while other teams stay clean due to Silver Castle's contribution. Magnum Ace is frustrated about the way things are going and Mach Windy, who can't stand the change, decides to leave the team with some other members and search for a team to defeat the corrupted Silver Castle.

SIL also has a drama CD, which is only available in Japan.

Examples provided in the series: