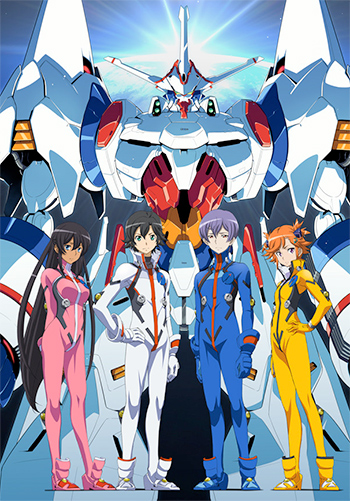 When I opened the door called Truth, my childhood ended.
It was a summer I could never forget.
Advertisement:

Captain Earth is a Super Robot anime from Studio Bones and the team behind Star Driver. And it shows.

A second-year high school student named Daichi Manatsu spots a weird circular rainbow floating around above Tanegashima Island on TV on the eve of his summer vacation, noting that he's seen it before in his past. Getting a bad feeling about the whole thing, he goes by himself to Tanegashima Island, which houses Japan's Tanegashima Space Center where his Astronaut father launched on his final ill-fated mission. Thinking of other mysteries including his dad's accidental demise and the memories of other weird boys and girls he met when he was a kid, Daichi arrives at the island and enters a facility from his childhood, and as alarms sound at the center, he finds a giant robot known as "Earth Engine" and acquires a strange gun called a "Livlaster."

Oh yeah, there's also this problem that equally-mysterious all-mechanical life forms called Kill-T-Gang are coming from Uranus to invade Earth for... something. Yep, sounds just like your average anime about a kid from high school piloting a giant robot in order to save Earth.

Problem is, not everyone wants him to save it...

Not to be confused with Captain Planet.