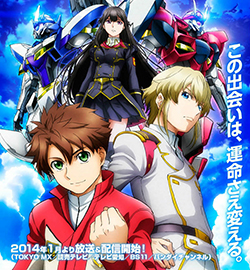 An anime produced by Bandai and Sunrise that premiered during the Winter 2014 Anime Season.

The story follows Aoba Watase, an all around Ordinary High-School Student from the year 2014. However, his normal life suddenly ends when a Humongous Mecha with an Ax-Crazy pilot obsessed with killing him suddenly lands in the schoolyard. Aoba is rescued by another mech piloted by his classmate Hina, who reveals that both she and the other pilot are from the future. In order to escape, Hina travels back through the portal that sent the enemy pilot to the past and begins to disappear, leaving Aoba with a message: Dio is waiting for him.

Aoba later awakens in the year 2088. The Confederate Treaty of Liberty Alliance (consisting of present day America, Japan, Australia, and Western Europe) has gotten into war with Great Zogilia (consisting of present day China, Russia, and Eastern Europe.) Dio and company are a small fleet working for the Alliance and testing their new Super Prototype, which allows two compatible pilots to synchronize and share their knowledge and skills. Oddly enough, Aoba happened to awaken in the mecha meant to couple with Dio's, and now he has to fight alongside the Alliance in the hopes of finding out what's happened to Hina, and if there's any chance of him returning to the past.

A continuation was announced mere hours after the show finished its run in the form of a two-part OVA titled Buddy Complex Final Act: Into the Skies of Tomorrow, released in September 2014 which concludes the story.