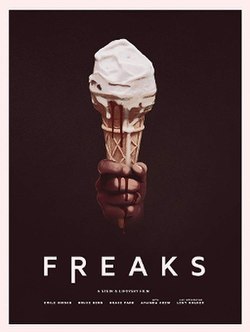 Freaks is a 2018 American-Canadian science fiction thriller film written and directed by Zach Lipovsky and Adam Stein, starring Emile Hirsch, Bruce Dern, Grace Park, Amanda Crew, and Lexy Kolker. Chloe Lewis (Kolker) is a seven-year-old girl who has been kept in the house all her life by her father, Henry (Hirsch), who tells her that there are "bad men" outside who will kill her if she ever leaves, and that her only chance is to be completely normal. With the influence of a mysterious ice cream man, Mr. Snowcone (Dern), and a growing curiosity about the world outside, Chloe finds that the world outside is not ready for her.

Her mother (Crew) is not as dead as Chloe had been told, there are dangerous people named Abnormals (referred to by most as Freaks) who are known by the bleeding from their eyes, Mr. Snowcone knows more about her than he has let on, and her new family across the road may not be as willing to take her in as Henry believes. Chloe may not be ready to go out into the world, but they're definitely not ready for her either.

Not to be confused with the 1932 horror film of the same name or the 2020 film Freaks: You’re One of Us, also about superpowers.