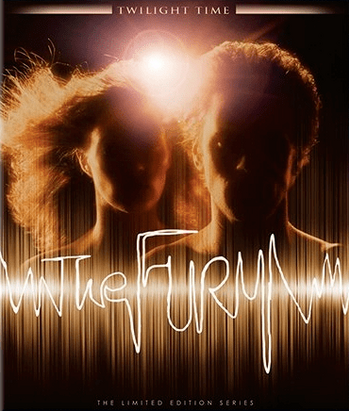 The Fury is a 1978 thriller film based on the novel of the same name by John Farris, directed by Brian De Palma and starring Kirk Douglas, John Cassavetes, Carrie Snodgrass, Charles Durning, Amy Irving, and Andrew Stevens.
Advertisement:

The film follows Peter Sandza (Douglas), whose friend Ben Childress (Cassavetes) — who works for a shady, unnamed government intelligence — arranges a fake terrorist attack to kill him and during the chaos kidnaps his son Robin (Stevens), intending to put his tremendous psychic powers to good use in the Cold War. Peter starts a desperate search for his son and tracks him to Chicago, where he enlists the aid of Gillian (Irving), a budding telepath who is being studied at the Paragon Institute by Dr. Jim McKeever (Durning), his assistant Hester (Snodgrass), and other people connected to Ben. Determined to silence Peter, Ben and his cronies are constantly hindering the process. Meanwhile, the experiments they've forced Robin to undergo have made him dangerously violent...

Gillian Bellaver and her best friend LaRue are introduced in their first scene walking on a beach in bikinis.

Gillian Bellaver and her best friend LaRue are introduced in their first scene walking on a beach in bikinis.