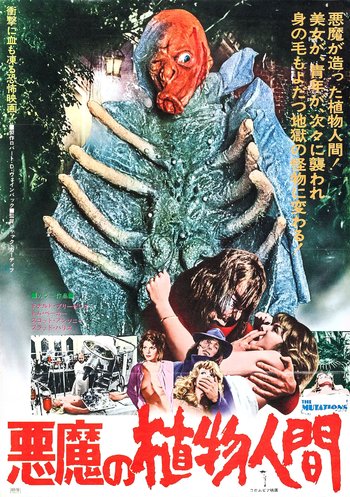 The Freakmaker (a.k.a. The Mutations) is a low-budget 1974 British-American science fiction/horror film directed by Jack Cardiff, and starring Donald Pleasence and Tom Baker.

Students have been going missing from the local college, and the one person who knows what's happened to them is Dr. Nolter, a rogue biologist. Not satisfied with the pace of natural selection in driving evolution, Nolter wants to push things further by creating his own genetically engineered creations. Having already created some amazing specimens by mixing the DNA of plants and animals, the doctor has now set his sights higher, and want to work on modifying humans, as well. The failed experimental mutants are then given to a cruel circus freakshow owner who exploits them to the fullest. However, the mutants and the circus freaks will not be denied justice.

Tropes in The Freakmaker include: