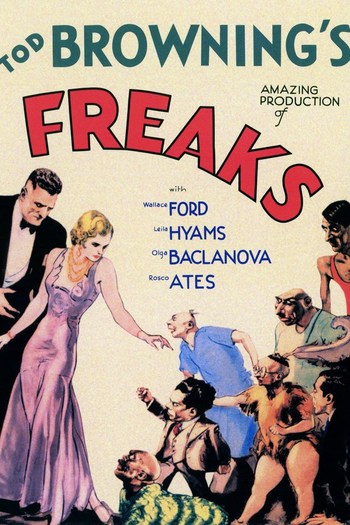 We accept her! One of us!
Gooble gobble, gooble gobble!
With your silicone hump
And your ten-inch stump
Dressed like a priest, you was
Tod Browning's freak, you was
—David Bowie, "Diamond Dogs"
Advertisement:

Freaks is a 1932 MGM horror film about sideshow performers, directed and produced by Tod Browning (coming off his success with the previous year's Dracula) and featuring a cast mostly composed of actual carnival performers. The film was very loosely based on Tod Robbins' short story "Spurs".

Browning had previously worked as a contortionist in a traveling circus, and much of the film was drawn from his personal experiences. He also took the exceptional step of casting real people with deformities as the eponymous sideshow "freaks", rather than using costumes and makeup on conventional actors. In the film, the deformed "freaks" are generally kind, well-meaning people. This contrasts with two of the "normal" performers in the circus (Cleopatra the acrobat and Hercules the weightlifter), who conspire to murder one of the freaks (a dwarf named Hans) and steal his large inheritance.

Upon release, the film was met with nothing short of extreme backlash from patrons, who reportedly ran out of the theater in fear; one woman attempted to sue MGM under the claim that the film caused her to suffer a miscarriage. As a result, the movie had several of its most disturbing scenes excised and permanently destroyed, cutting its 90-minute runtime down to just over an hour; this didn't do anything to quell the outcry, and it died an undignified death in the box office as a result. Seemingly relegated to Hollywood's dustbin, the film was rediscovered over 30 years later by the midnight theater crowd, leading it to gain a following as a Cult Classic and lost gem of pre-Code film history.

One bit of influence the film has had: The "Gooble gobble, we accept her, one of us" chant with which the freaks welcome Cleo (not that she appreciates it) was worked into the songs "Pinhead" by The Ramones, "Donkeytown" by Doctor Steel, and "Separated Out" by Marillion, and has long since eclipsed the film itself in pop-culture prominence. David Bowie also namedropped the movie and its director in the title song on his album Diamond Dogs.

Not to be confused with the 2018 film Freaks, the 2020 film Freaks: You’re One of Us, or the series Freaks and Geeks.

"We wouldn't lie to you folks, we told you we had living breathing tropes!":