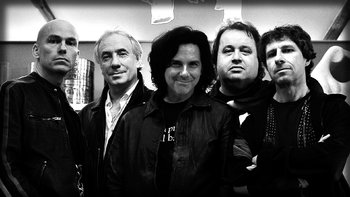 Left to right: Mark Kelly, Ian Mosley, Steve "H" Hogarth, Steve Rothery, Pete Trewavas
"Am I enough of a freak to be worth paying to see?"
— Marillion, "Separated Out", from Anoraknophobia (2001)
Advertisement:

Marillion are a Progressive Rock group formed in 1979 in Aylesbury, England. They rose to prominence in the early 80's as one of the leading bands of the "neo-prog" scene, which combined the expert musicianship of progressive rock with the accessibility of New Wave, and remain active and prolific to this day.

Their career falls into two distinct periods, separated by the departure of original front man Fish in 1988 and his subsequent replacement with Steve Hogarth. Both periods have a dedicated following, leading to a severe case of Broken Base.

In recent years, Marillion have gained some notability for their innovative use of the internet as a means of communicating with the fan base and selling records. They have been independent from any record company since 2001, when they financed the release of their album Anoraknophobia entirely with internet pre-orders.