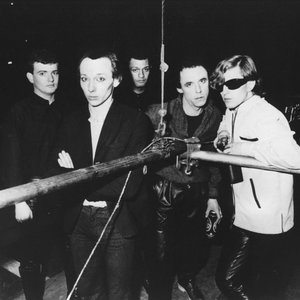 Clarity Has Reared Its Ugly Head Again
I demand special consideration as the most human
Now that's not much to ask, is it?
But it makes me feel like a force for evil
— Magazine, "Of Course Howard (1979)"
Advertisement:

Magazine are a rock band, originally from Manchester, England, noted for (arguably) being one of the Trope Makers of the Post-Punk genre. Their lead singer, Howard Devoto, was originally lead singer of the Buzzcocks, but left after their first release, Spiral Scratch, allegedly believing that punk would be short lived and that something would need to be ready to take its place.

Devoto met Scottish guitarist John McGeoch, and while McGeoch was away Devoto recruited Barry Adamson on bass, keyboardist Bob Dickinson, who soon left and was replaced by the keyboard god that is Dave Formula, and drummer Martin Jackson — who also left eventually, to be replaced by John Doyle.

They soon released a single, at the time sans keyboardist, entitled "Shot By Both Sides", followed by an album, 1978's brilliant Real Life. The following year, they released the far more experimental Secondhand Daylight, followed by 1980's more popular (though not necessarily better) The Correct Use Of Soap. This in turn was followed in 1981 by Magic, Murder and the Weather, but by then McGeoch had quit (going on to develop as a bit of a New Wave guitar god in other bands), and although the band found a series of short-term replacements, Devoto broke up Magazine and more or less quit the music business to work as a photo archivist.

Magazine reformed for a while in 2009, with Noko taking the place of McGeoch, who had died in the interim. Adamson — who since their breakup carved himself out a career in composing soundtracks, as well as a successful stint in Nick Cave And The Bad Seeds — left after a while, being replaced by Jon "Stan" White, and the band released a new album, No Thyself. In fact, at the last count, they were nominally still going, if not visibly active.

They are a band who attract some devoted admirers, inside the music industry as well as among fans, though their style and image also seem to irritate some other people.

Magazine's work and career provide examples of the following tropes: