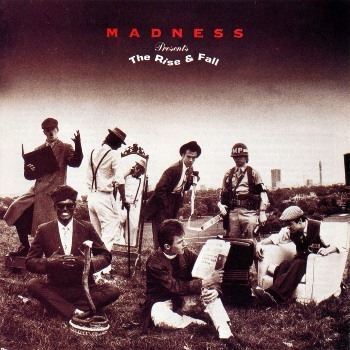 "I'm happy the way that I do things
Continually feeling okay
I've no worries on what tomorrow brings
Because I live my life day by day
People say that I'm crazy
But I'm not that way inclined
I know what I know and I'll happily show
That madness is all in the mind"
—"Madness (Is All in the Mind)"
Advertisement:

The Rise & Fall is a 1982 album by Madness, generally seen as one of their best albums. It is most noted for their hit song "Our House".

The record started out as a Concept Album about nostalgia for childhood and a few songs ("The Rise & Fall" and "Our House") still remind of the original idea. However the concept was later dropped. The album was noted for being more experimental than their other albums, trying out new styles such as Jazz, Music Hall and Eastern influences. They even wrote a Protest Song with "Blue Skinned Beast", targeting British Prime Minister Margaret Thatcher and her handling of The Falklands War (1982). The band had never been political before, but from this album on they became more politically and socially conscious.

The Rise & Fall is also a notable example of No Export for You, seeing that it was never released in the USA. However, several tracks later ended up on the compilation Madness, which did make it over to the States.

Our tropes... in the middle of the street: