Series / The Young Ones 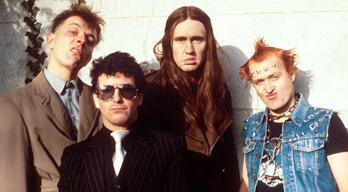 L to R: (P)Rick, Mikenote the cool person, Neil Pye and Vyvyan Basterd.
"What's the difference? There'll be plenty of chicks for these tigers on the road to the promised land. This is it. It's really happening. Who needs qualifications? Who cares about Thatcher and unemployment? We can do just exactly whatever we want to do. And you know why? Because we're Young Ones. Bachelor boys. Crazy, mad, wild-eyed, big-bottomed anarchists."
— Rick, moments before everyone dies.
Advertisement:

A demented British comedy that ran from 1982 to 1984 about four impoverished nutcases sharing a squalid student house. Episodes were rambling and unstructured, frequently wandering off to unrelated comedy skits or musical numbers. Surreal and/or incomprehensible jokes were aplenty, frequently making light of the acrimonious political climate of 1980s Britain, and violent slapstick abounded. The action would often and suddenly shift into animation, claymation or some form of puppetry. Bands often appeared on the show to perform, usually completely at random (as a financial device, as the inclusion of music performances got the show classified as variety instead of light entertainment, thereby earning a higher budget). Numerous episodes ended with everybody dying.

So basically, it's La Bohème meets The Three Stooges set in the early 1980s. The show lasted two seasons, for a total of 12 episodes.

Worth a mention as a show which never relied on cliché to any extent; any tropes that popped up were usually subverted and double-subverted within minutes, if not seconds. The entire premise of the series, such as it was, was a particularly odd subversion of the Dysfunctional Family trope. Its spiritual descendant, Bottom — basically Mayall and Edmondson playing even more unpleasant Expies of their Young Ones characters — premiered in 1991.

Not to be confused with the 1961 film

starring Cliff Richard (if not his song of the same name

, a cover of which is the show's theme).

Have We Got a Video?

In the episode 'Nasty', Mike and Vyvyan try to watch a video nasty, which leads to other characters to excitedly ask throughout the episode 'have we got a video?', much to the increasing frustration of Vyvyan.

Have We Got a Video?

In the episode 'Nasty', Mike and Vyvyan try to watch a video nasty, which leads to other characters to excitedly ask throughout the episode 'have we got a video?', much to the increasing frustration of Vyvyan.