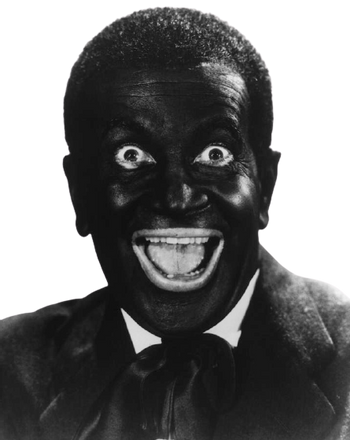 Blackface is the tradition of a performer putting on stylized black makeup to appear as a stereotyped character of African descent. The usual version includes dark or pitch-black makeup and bulging red or white lips. Blackface was often used in Minstrel Shows. The image is associated with negative, stereotypical depictions of black people in the Western world and has become shorthand for anti-black racism. As much as some people would like to forget it, blackface was a part of mainstream American entertainment for almost 100 years until racial backlash ultimately capsized it.

Because of their pervasiveness in the US, blackface minstrel shows traveled widely throughout Europe and Australia, where they were imitated by local actors. This led to domestic blackface traditions springing throughout the West and even in many non-Western countries. Lesser cultural stigma outside the US ironically allowed mainstream blackface to survive for far longer than in its country of origin. While most European countries nowadays do not consider the trope as mind-blowingly offensive as the Anglosphere, a mix of Eagleland Osmosis and a greater awareness about racism has led to it becoming increasingly socially unacceptable and controversial. Blackface characters still pop up in Japanese culture and media from time to time, often causing massive headaches for exporters.

The trope remains a sensitive subject to this day, partially because of its close association with Uncle Tomfoolery, and causes quite a backlash whenever it shows up in mainstream American culture. Even depictions that criticize the trope or people who engage in it can cause a work to become embroiled in controversy.

Instances of Fake Nationality involving a lighter-skinned actors playing darker-skinned characters will often raise eyebrows due to straying too close to the trope. Yellowface is a similar practice involving Asian characters, while Brownface is for characters of various "brown" races.

The inversion, black actors playing white people, is rarely done straight. When this happens, it's almost always in-universe and for comic effect. Compare and contrast Black Like Me. Both involve using makeup to make a white person look black. However, Black Like Me is usually done to teach a moral about tolerance to the audience.

Works in which Blackface appears