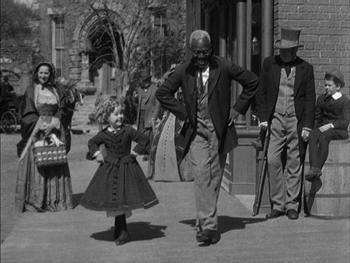 Shirley Temple plays Virginia "Virgie" Cary, a pint-sized Southern Belle during The American Civil War. The slaves are happy (of course) and for some reason no one has a Southern accent.
Advertisement:

In the opening scenes, Virgie is celebrating her sixth birthday. Unfortunately, her sixth birthday happens to be April 12, 1861 (what are the odds?). Captain Herbert Cary goes off to war, leaving Virgie in the care of her mother and their happy, happy slaves. The Cary family owns a number of slaves, but the two main ones are Uncle Billy, a tap-dancing butler played by Bill "Bojangles" Robinson, and James Henry (Willie Best), who is portrayed as The Ditz. The damn Yankees show up and are mean, except for their leader, Colonel Morrison, who is a Friendly Enemy. Somehow, it all ends up with Virgie sitting in Abraham Lincoln's paternal lap and convincing him to grant presidential pardons to her father and Colonel Morrison.

The movie is an adaptation of a 1911 play of the same name, which was earlier adapted as a silent film in 1914. This 1935 version takes the original play, a serious drama about the toll war takes on an innocent little girl, and turns it into a family-friendly musical because why not. Well, family-friendly except for the racism. It is this movie's whitewashing of slavery and sympathy of the Confederacy which makes it the most controversial entry in the Shirley Temple canon.