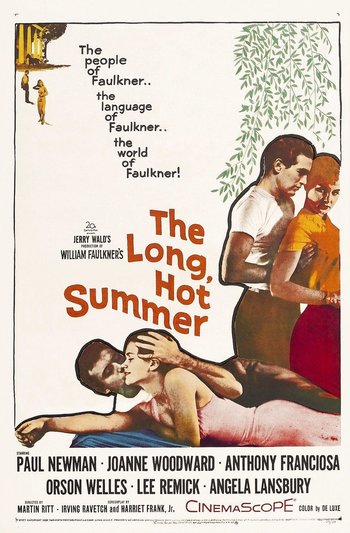 A 1958 drama directed by Martin Ritt, starring Paul Newman and Joanne Woodward in the first of many films they would make together. It also stars Orson Welles' fake nose.

Ben Quick (Newman) is a handsome and confident young man with ambitions to rise above his current condition in life. Unfortunately, he comes from a family with a..."reputation"...that leads the people of his hometown to accuse him of barn-burning (a revenge tactic that was common in the 1950s South, and a good way to get yourself lynched). Ben does not deny or confirm the townspeople's accusations, but he agrees to leave when they cannot find enough proof to convict him. He becomes a drifter, wandering the humid environment of Mississippi just as the Summer starts. After weeks of travel, he hitches a ride with two women driving into the nearby town of Frenchman's Bend: Clara Varner (Woodward) and her sister-in-law, Eula (Lee Remick). The latter is a gorgeous Southern Belle with a flirtatious and easy-going nature, freely chatting with Ben about everything under the sun. The former is serious-minded and seems totally immune to Ben's charm. She cooly dumps him in the middle of town and drives off, content to never see him again. But we all know the chances of that happening...

As Ben soon finds out, practically the entire town is owned by Will Varner (Welles), Clara's widowed father. Will takes an instant liking to Ben, who refuses to kowtow to the wealthy landowner. Will sees in Ben a younger version of himself, with his ruthless ambition and easy confidence, something sorely lacking in his only son, Jody (Anthony Franciosa).

Will is also disappointed by his daughter Clara, who works as a local schoolteacher and is still single. Her only prospect is a local blue-blood named Alan... who is also a complete Momma's Boy. Determined to rejuvenate his family line with some stronger blood, Will comes up with a plan: to marry Clara and Ben before the Summer is over. Ben is game after Will offers him loads of cash. Clara, on the other hand, is not happy with the arrangement. Meanwhile, Will is under pressure from his mistress, Minnie Littlejohn (Angela Lansbury), to go ahead and tie the knot.

Based on a compilation of stories by William Faulkner, particularly "The Hamlet"

, the film became a hit thanks to its well-written, sultry dialogue and the romantic chemistry of the two leads, Newman and Woodward (who married soon after filming was completed).

Was remade twice for television, in 1965 and again in 1985, with the latter receiving two Emmy nominations.