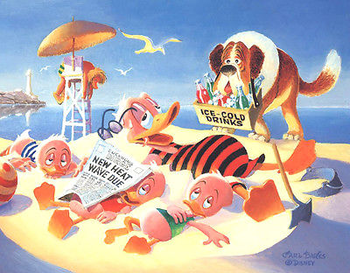 "Anyone call for roast duck?"
"There was a desert wind blowing that night. It was one of those hot dry Santa Anas that come down through the mountain passes and curl your hair and make your nerves jump and your skin itch. On nights like that every booze party ends in a fight. Meek little wives feel the edge of the carving knife and study their husbands' necks. Anything can happen. You can even get a full glass of beer at a cocktail lounge."
— Raymond Chandler, "Red Wind"
Advertisement:

The temperature is 115 plus degrees Fahrenheit (46 degrees Celsius), and people are soaked with sweat. It's the hottest it's ever been since June 26, 1889. You could fry an egg on the sidewalk. Everyone has their air conditioner cranked up, and those not fortunate enough to own one are desperately looking to cool down. Just staying outside for a prolonged period of time can be dangerous. No one wants to move. Everyone is understandably cranky because of the hot weather, but according to the weatherman, there's no sign of things cooling down.

It's the Heat Wave, a common device employed by writers to increase irritability and stress among characters Locked in a Room and Getting Hot in Here, in a Hostage Situation, in a Die Hard Plot, or in a climactic Courtroom Battle. In TV episodes and movies in which the entire plot takes place in one day, the Heat Wave will be dubbed in-universe as The Hottest Day of the Year. Alternatively, or additionally, the Heat Wave may serve as a symbolic metaphor for the tension or anger that builds up among the characters throughout the story.

Of course, the heat can also serve as a good excuse for having characters walk around in skimpy or soaked-to-the-skin clothing.

See also Big Blackout. Like Snowed-In and Rain, Rain, Go Away, an aversion of It's Always Spring. Contrast Cold Snap, the other temperature extreme. Often a sign that A Storm Is Coming, in fiction as in real life.

Not to be confused with It Was a Dark and Stormy Night. Unless the night was sultry. See also Fat, Sweaty Southerner in a White Suit.

A.k.a. Long Hot Summer (media shorthand for the urban riots of the '60s-70s) or The Dog Days Of Summer.

A heatwave strikes Seaside, and a responsible-driven Arlo is pestered by his friends to use his dad's yacht as a chance to cool off.

A heatwave strikes Seaside, and a responsible-driven Arlo is pestered by his friends to use his dad's yacht as a chance to cool off.