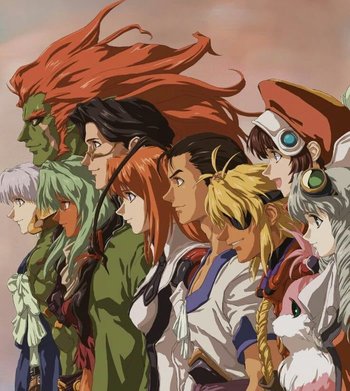 Xenogears was released by Squaresoft in 1998, and is probably their most well-known PlayStation game that isn't Final Fantasy VII, VIII, IX, or Tactics. It is particularly remembered both for a uniquely convoluted plot spanning ten thousand years; themes cooked out of Gnosticism, Jewish mysticism and Jungian psychology; and an atmosphere which was remarkably Anime-like for its time, leading to the game's infamous hour-long cutscenes, and its Troubled Production that resulted in the game's rushed state.

The world of Ignas is in conflict between the countries of Aveh and Kislev. Aided by a mysterious organization called "Gebler", Aveh has successfully forced a stalemate against Kislev, while a neutral Church like group called Ethos provides both sides with unearthed Humongous Mecha called "Gears". Meanwhile, a young man named Fei Fong Wong lives in the remote village of Lahan, while dealing with amnesia. His life is changed when a battle between Gears occurs outside his home, and In an attempt to save the village, Fei uses one of the Gears to fight back, causing him to lose control and destroy his home. With his fate bound to the Gear, which is being hunted by the military, our reluctant hero has to flee inside it. From there, Fei goes on a journey to stop the war, find thr truths of the world, and discover himself, aided by those he meets, including a woman named Elly, with whom he finds a strange connection to.

The game was written and directed by Tetsuya Takahashi, who later on would become the founder of the Monolith Soft studio. Interestingly enough, the game's creators have stated that in its early development stages, Xenogears was planned to be Final Fantasy VII, and later, Chrono Cross. Despite a rocky development, the game would go on to become a cult classic, and served as the start of Takahashi's venture into the genre, leading to two other series; Xenosaga and Xenoblade Chronicles, all of which draw inspiration from this game.