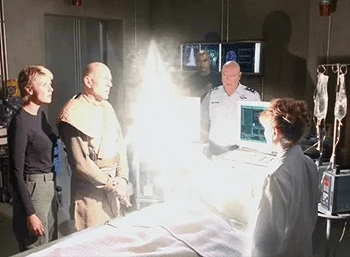 It's like being put on a glowing, celestial bus.
Jackson: I'm energy now.
O'Neill: [sarcastically] How's that working out for you?
Jackson: Good, actually.
— Stargate SG-1
Advertisement:

The character ascends to a higher state of being, possibly even becoming a god. It can result from other supernatural causes, but is most often used as a character's fate after they die, in a riff on the idea of a heavenly afterlife.

It is mostly a way to pay off a character. Or play off, in some cases. A way to put the character on a bus, though that's not all that it's used for. If the writers should need the character back, it can be very easy to reverse, in which case the character will De-power as a God in Human Form. Sometimes the accession isn't even meant to be permanent if the writer needs some way for a character to enter a higher plane, then leave with something important like knowledge or a new power. If the character has left their clothes behind, untouched, it's a case of Shapeshifting Excludes Clothing.

Expect examples of this trope to make use of the words "ascend" and "above" in line with Heaven Above, where the divine and supernatural are associated with the sky above us. Compare Disappears into Light, Winged Soul Flies Off at Death, No Body Left Behind, Fading Away. Contrast Cessation of Existence. See Ending by Ascending for more symbolic versions of this.

As generally a Death Trope, most Spoilers will be unmarked ahead. Beware.