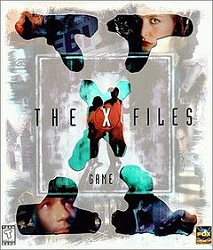 "The Truth... is out there."
Advertisement:

The X-Files Game is a FMV Game Spin-Off to The X-Files, released in 1998. Set during the events of Season 3, you play as a young Seattle FBI agent named Craig Willmore, who is tasked with tracking down Fox Mulder and Dana Scully after they go missing while on a case in Everett, Washington.

The game is close to an Adventure Game, as you explore environments for clues while using various items from your FBI toolkit to solve puzzles. These can trigger a surprising number of Easter Eggs and Bad Ends, such as phoning certain characters, or being fired or arrested for using your gun at inappropriate moments. There are also Visual Novel elements, as you can choose dialogue options which affect certain scenes in the game: for example, if you frequently choose paranoid or serious responses, then scenes shift to include more Paranoia Fuel elements (like Craig spotting a featureless black van following him).