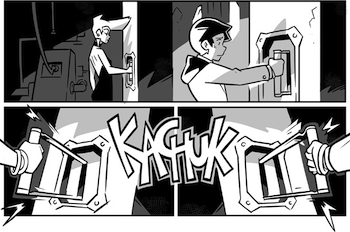 Dr. Petrov: This is most unnerving, Captain. The whole reason for having two keys is so that no one man...may...
Captain Ramius: May what, Doctor?
Dr. Petrov: ...May arm the missiles, Captain. Perhaps I should hold the other key—
Captain Ramius: Mmm, thank you, Doctor. That will be all.
— The Hunt for Red Octobernote After Ramius takes and keeps the nuclear missile launch key from the ship's dead political officer, whom he secretly killed, meaning that he is now in possession of both launch keys.
Advertisement:

Certain locks require two or more people to unlock them simultaneously. The idea is that even if someone malicious got hold of one key, they'd still need to get hold of the second key. And even if they managed to do that, they'd still need to be able to turn all the keys at once, which are usually placed too far apart for one person to do so on their own. Maybe it's the keys to the world's destruction or the kingdom's treasure, but whatever it is, it's so important that you know it must be good... or really bad.

Common in military settings and very much Truth in Television with Nuclear Weapons. An implementation of the more general military concept of "Two Person Control" (TPC).

A variation seen in video games, especially ones with co-op play, is a stock puzzle that requires two characters to activate triggers in different places at the same time to complete an objective.

May sometimes be played for laughs, where the thing being protected by the two keyed lock turns out to be something mundane, or even silly. Not to be confused with Double Unlock, which is about enabling new game features.

The model of the Cerritos comes with an ejectable warp core that is triggered by turning two tiny keys hidden behind a panel on the bridge.

The model of the Cerritos comes with an ejectable warp core that is triggered by turning two tiny keys hidden behind a panel on the bridge.