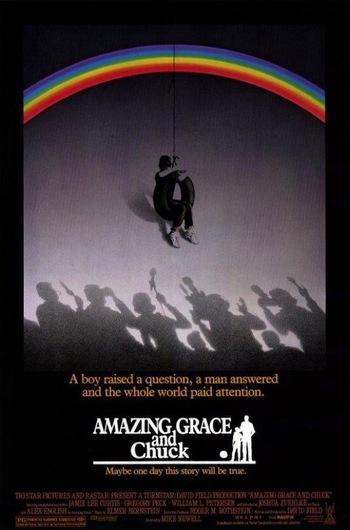 Amazing Grace and Chuck is a 1987 film about a boy who protests against nuclear weapons and the pro-athletes who join him by going on strike.

Chuck Murdock is a 12-year-old boy (and local star little league pitcher) from Montana (then real-life Little Leaguer Joshua Zuehlke) who goes on a field trip to a nuclear missile silo. While there, he becomes unnerved by the sight of the missile and the guide's description of the destructive power of the ICBM. After a nightmare about the missile launching, he stages a protest by walking out rather than pitching in his little league game, to the dismay of his teammates and his father, Russell (William L. Petersen), none of whom seem to understand why he's suddenly so upset about nuclear weapons.

This story is picked up as a human interest piece by several local papers and comes to the attention of fictional NBA player "Amazing Grace" Smith (played by real-life NBA player Alex English, who at the time played for the Denver Nuggets - Amazing plays for the Boston Celtics). The pro-athlete, fascinated by the boy's convictions and dedication, decides to go meet him. After listening to Chuck's explanation about "giving up what he does best" as a form of protest, Amazing decides to follow suit, publicly announcing that he is resigning from basketball (crediting Chuck as his inspiration) until there are no more nuclear weapons. He buys some land in Chuck's town and the two begin an unlikely friendship. They are soon joined in their strike by more and more pro-athletes, who make their movement's base of operations in a renovated barn on Amazing's land. Eventually the movement extends to athletes from other countries and even across the Iron Curtain.

But some of the forces that be are not happy about these developments which threaten the status quo, and thus their personal power and influence. A shady businessman named Jeffries, working behind the scenes, resolves to break the growing movement. Chuck and Amazing face enormous pressure from all sides (including economic and physical threats to themselves and their loved ones) as they struggle to spread their message for peace and take a stand for what they believe in.

The story reaches a climax with Amazing's plane being blown up by the conspiracy against them, at which point the movement takes on a somber tone. Starting with Chuck, children all around the world begin a protest of refusing to speak at all. In the end, the President of the USA and Premier of the USSR (both lamenting that their people are on the verge of mass unrest over their children's silent protest) meet to hammer out terms that will immediately begin dismantling their nuclear arsenals. The protests end successfully, the athletes return to work and the children begin speaking again, but young Chuck's childhood has ended far too early.

As over-the-top as the plot sounds, the story is well-told, well-acted, and taken very seriously.

Stars Jamie Lee Curtis as Lynn Taylor, Amazing Grace's manager and close friend, and Gregory Peck as the US President. Directed by Mike Newell (Four Weddings and a Funeral, Harry Potter and the Goblet of Fire).

Not to be confused with Amazing Grace. Or with Chuck, for that matter.