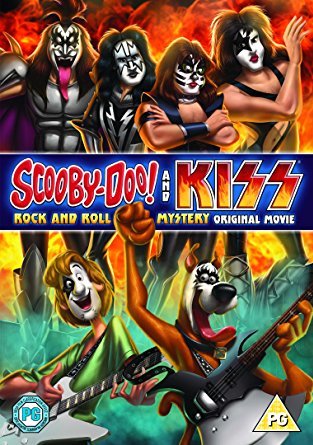 Scooby-Doo! and KISS: Rock and Roll Mystery is Exactly What It Says on the Tin. Scooby-Doo and KISS are together in an animated movie with a rock and roll inspired mystery. It is the 24th Installment in the Scooby-Doo Direct-to-Video Film Series. It is also the final entry in the franchise (to date at least) to feature Mindy Cohn as the voice of Velma. Kate Micucci would replace her starting with Be Cool, Scooby-Doo!.

The story features Scooby and the gang coming to the Kiss World amusement park to see KISS play a Halloween concert where — surprise surprise — they stumble upon a mystery. Or perhaps, everything is not as it seems? Or is it?

Scooby-Doo! and KISS: Rock and Roll Mystery provides examples of: