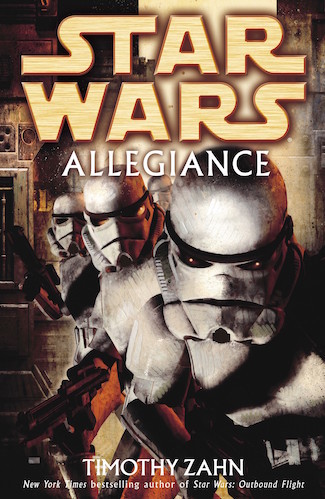 is a Star Wars Legends novel by Timothy Zahn, published in 2007. It's set six months after A New Hope.

As the title suggests, this book features people and groups who are having allegiance issues. Han Solo is resentful about how it seems like everyone is assuming that he's committed himself to the Rebellion, although he hasn't left yet, and while Luke Skywalker is utterly committed, he worries about Han and is very green. Five stormtroopers desert from the Star Destroyer Reprisal and form a sort of vigilante group called the Hand of Judgment, believing that the Empire has abandoned the ideals that they signed up for. Mara Jade is in the prime of her career as Palpatine's secret agent and assassin, the Emperor's Hand. Consciously, Mara is absolutely certain of the rightness of the Empire, but she is on the hunt for traitors and there are numerous tiny hints that she's against various aspects. Meanwhile, Leia is sent to negotiate between various Rebel leaders who are threatening to leave, and to investigate a regional governor who claims to want to secede, but is really doing all of this to gain power.

It's a Zahn plot, so a lot of things are happening at once, and the plotlines tangle together. Luke and Mara don't meet until The Thrawn Trilogy, so it's the stormtroopers who interact with both Mara and the Rebels. This is notable as being the first Zahn Star Wars novel to never mention Thrawn. Not once. There's a fleeting mention of Grand Admirals, but that's it.

A direct sequel, Choices of One, was released later, right on the 20th anniversary of Heir to the Empire.

Not to be confused with the computer game Allegiance, the TV series Allegiance, or the stage play Allegiance, nor with the 2019 comic book Star Wars: Allegiance, which is set after The Last Jedi in the new continuity.

Survivor's Quest—also by Zahn—did it first with the four stormtroopers of Aurek Seven, who are a deeply Badass Crew. Since Choices of One confirms that Thrawn hired the Hand of Judgment to train his own elite squadrons, it's to be expected. It isn't just the Hand of Judgment, either—the narrative in Allegiance also goes out of its way to remind the reader that the stormtroopers on the Death Star were under specific orders to let the heroes go...