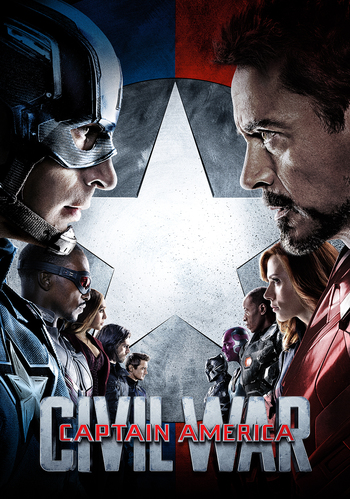 Whose side are you on? note On the left side: Captain America, The Falcon, Scarlet Witch, Bucky Barnes, and Hawkeye. On the right side: Iron Man, Black Widow, War Machine, The Vision, and Black Panther. Not pictured: Ant-Man, Spider-Man, Sharon Carter, Thunderbolt Ross, Crossbones, and Baron Zemo.
"Steve, you know what's about to happen. Do you really wanna punch your way out of this one?"
— Black Widow
Advertisement:

Captain America: Civil War is the 2016 sequel to both Captain America: The Winter Soldier and Avengers: Age of Ultron, directed like Winter Soldier by Joe and Anthony Russo. Civil War marks the 13th overall film in the Marvel Cinematic Universe, and the first film of the MCU's Phase 3. It is based on the Civil War limited series, albeit on a much smaller scale. The film also marked the beginning of a cross-company partnership between Marvel Studios and Sony Pictures with the inclusion of Spider-Man.

Following the dissolution of S.H.I.E.L.D. in Winter Soldier, one of Tony Stark's creations going on a killing spree in Age of Ultron and Scarlet Witch's accidental destruction of a building while saving Captain America during a terrorist attack in Africa, the collective governments of the world ratify an accord to regulate the actions of "enhanced individuals". This polarizes The Avengers and other superheroes, who split into two factions. On one side is Steve Rogers/Captain America, who fears superhumans becoming political pawns after the events of Winter Soldier. On the other is Tony Stark/Iron Man, who becomes a major proponent of the Sokovia Accords as atonement for his actions in Age of Ultron. When Steve's lifelong friend Bucky Barnes resurfaces, accused of carrying out a terrorist attack, the former allies now find themselves facing each other in a battle that will change their lives, and the world, forever.

Civil War's events and their consequences directly impact a number of movies continuing the overall narrative — Spider-Man: Homecoming, Black Panther, Ant-Man and the Wasp, Black Widow and Avengers: Infinity War. The latter and its sequel were also directed by the Russo brothers. Following the events of Infinity War and Endgame, the stories of several characters from the film are picked up in The Falcon and the Winter Soldier, and a fourth Captain America film is in development.

open/close all folders
Tropes A to E
Tropes F to K
Tropes L to P
Tropes Q to S
Tropes T to Z
"So, no matter what, I promise you, if you need us — if you need me — I'll be there."
Feedback

The Honest Trailer for Captain America: Civil War describes the many plot similarities with Batman vs. Superman, which were both released in 2016.

The Honest Trailer for Captain America: Civil War describes the many plot similarities with Batman vs. Superman, which were both released in 2016.