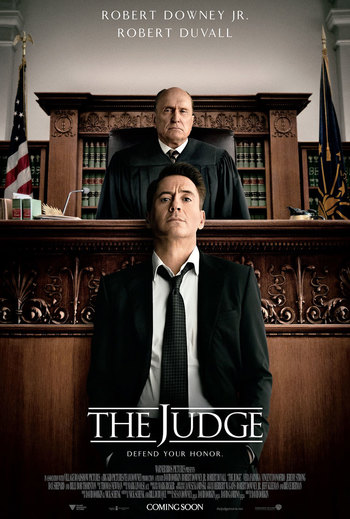 Hank Palmer (Downey) is a successful defense attorney who has received news that his mother has passed, and returns to his hometown of Carlinville, Indiana to attend the funeral. Once he arrives, he reunites with several members of his family, including older brother Glen (Vincent D'Onofrio), younger brother Dale (Jeremy Strong), and his father, local judge Joseph Palmer (Duvall), with whom Hank doesn't have a very good relationship.

Although Hank decides to leave due to the friction between himself and Joseph, he is forced to remain in town when it's revealed that Joseph was involved in a fatal hit-and-run involving a victim he previously ruled on during a court case. Hank decides to defend his father in court after the latter's initial choice for attorney proves disastrous, and the younger Palmer faces tough prosecutor Dwight Dickham (Billy Bob Thornton), who is pushing for a first-degree murder charge. At the same time, Hank reconnects with his family and his estranged girlfriend Sam (Vera Farmiga), whom he abandoned twenty years earlier and wishes to make amends with.

The film was the first project released under Downey's production company (which he founded with his wife Susan), Team Downey. It received mixed reviews upon release.